Valentine’s Day doesn’t just denote a Hallmark holiday. It also marks the end of proposal season, with a lot of partners popping the question on the sweetest day of the year.

Before you decide whether or not to say, “Yes!” it’s important to make sure you and your love are on the same page financially.

Whether you’re considering the hard numbers of your partner’s personal finances or the values and struggles money often unwittingly masks, you need to discuss money in depth before getting super serious – marriage proposal or no.

Here are some of the questions you should ask before taking things further.

What is your relationship with money?

Starting with big, open-ended questions can potentially be an easier and less-awkward way to open up money conversations than leading with, “In exact dollar amounts, how much credit card debt do you have?”

By asking your partner about their relationship with money, you’re giving them the opportunity to ease into the conversation. They may lead with the financial habits they’re proud of. Or they may reveal the money quandaries they feel the most shame over.

Either way, by leaving things open-ended, you’re allowing them to take the lead and reveal things at their own comfort level.

Don’t get it twisted: You will need to eventually delve in deep and get specific numbers across some uncomfortable categories. But if you can lead from a place of trust and self-revelation, the conversation is likely to be less turbulent.

How was money handled in your home growing up?

How our parents handle money can have a huge impact on how we manage our own finances.

Whether we think of money as something that’s regenerative or finite, that’s probably a result of how we saw it managed in the home.

Whether we think it’s to be spent as soon as it comes in or something to be saved until the next inevitable crisis lying just around the next corner, that’s also probably a result of how we saw money managed in our childhood homes.

By asking your partner about how money was handled in their home, you’re giving them a chance to not only give you a glimpse into their background but also evaluate their own money attitudes and habits on a level they may have never explored before.

By placing the focus on their parents, it allows them to get a little closer to third-party objective about these behaviors that may have been passed down.

The same goes for you – be prepared to answer any questions you ask!

What are your career ambitions?

Learning more about your partners’ career ambitions tells you a lot about them. It tells you if they like what they do, if they have taken the initiative to do some planning and goal setting for their own independent future and potentially even if view their current job as a career at all.

These things aren’t just important to know for financial reasons. Future career potential does have economic implications when you’re in a partnership.

But your partner’s answers also tell you something about goal setting and achievement as they self-reflect on both where their career has been and where it’s going. It tells you about their ambition levels and if they are looking for someone to provide for them or someone to walk beside them as they make their own way through life.

Bear in mind that not everyone’s career path works the same. You could work in a unionized field and be perfectly happy with you position, partially because raises and the like are more commonly based on seniority than anything else.

In the corporate world, you may expect to see someone more focused on climbing the ladder. In any field, you may run into date-worthy heartthrobs who are focused more on the meaning and impact of their work than taking over a specific management chain.

What are your financial goals?

Talking financial goals can be fun if you can get everyone over the angst of using the word “financial.” Essentially, you’re asking, “What do you want your life to look like, and how are you using your money to get there?”

Goals like traveling the world, starting a family, pursuing education or becoming a snowbird in retirement are all things that usually light up smiles and ignite excitement. If that’s as far as the other person has gotten, don’t fret.

Just follow up with the second part of the question again, “How are you going to use your money to get there?”

If the person is excited to set all the goals and review all the financial progress charts, you’ve got a keeper. Or at least someone who deserves a good look. Hook them up with Tiller to get them access to their current spending habits, future budgets and all those beautiful progress charts in a jiffy.

If your partner shuts down, they’ve got some work to do. It’s baggage they’re likely taking from their youth or past financial/emotional experiences, and isn’t something you can fix for them. Not telling you to dump your boo just because they have a couple money hang-ups, but do note the unwillingness to work towards solutions as a red flag.

What things are you willing to sacrifice in order to afford the things you really want?

This is another fun question to ask after you’ve established financial goals. It may not initially seem fun as it does involve sacrifice, but once you’ve identified the areas you and/or your partner are willing to cut, you can start seeing real progress as you reach those goals at a faster clip.

This question is also a great way to get insights about your partner’s values; what is and isn’t important to them in life. Your values don’t necessarily have to be identical, but you do need to understand them in each other.

If they’re not into making any sacrifices, that’s another huge red flag. Life is a series of compromises and trade-offs. It’s full of difficult times and disappointments.

The ability to sacrifice within healthy boundaries is usually a vital part of living a well-adjusted life – especially with another person by your side.

Do you have debt and how much?

Yes, this is a basic and not-fun question, but it’s an important one to know the answer to before getting heavily romantically involved.

Take this question a couple steps further by asking about which domains the debt is held across. Is it credit card debt? Student loans? Auto loans? Something else? Then, be sure to ask what they’re doing about it.

Even those with apparent mountains of debt may be financially stable in the future if they have a solid payoff plan. Or, they may be interested in learning more about how to tackle debt, but haven’t had the good fortune of being introduced to the snowball vs avalanche method yet.

Conversely, someone could be carrying a smaller amount of debt but view it as a constant in life, which may or may not conflict with your own values.

Do you consider yourself to have a bad shopping habit or gambling problem?

Ask point-blank. It’s going to be uncomfortable, but being honest about your shopping habits with your partner lets them know what they are getting into. If someone is aware they have a problem themselves, they may be willing to work on it.

Don’t think you can get away without asking this question based on your partner’s gender. Despite a persistent cultural belief that shopping addiction is a women’s issue, studies show that men and women demonstrate this tendency at very similar rates. The gambling divide between men and women is dissipating, too.

How do you save for retirement?

Do they get a match at work? Are they maxing out their contributions every year? Are they vested? If not, when will they be eligible?

It is a good idea to know numbers when you’re in a serious relationship, but this line of questioning also tells you a lot about how your partner plans for the future in general. If there is a void in knowledge about investing, don’t turn around and walk out the door. Offer resources or commit to learning more together.

Do you want children, and if so, do you envision one of us becoming a full-time homemaker?

Children in and of themselves cost a lot of money, but in the modern world, there’s even more to consider than simply the cost of food and shelter (even though those are two of the biggest line items on a lot of Americans’ budgets.)

In a world where a dual-income household is almost required across many career fields in order to earn above the median income, the cost of childcare and one parent potentially sacrificing part of their career becomes a very real part of the financial equation.

One parent may even want to stay home after the children are born, but not be able to because of economic realities.

Childcare can costs run as high as college tuition annually, but taking time off from your career – especially if you’re a woman already facing the gender pay gap – can have even larger effects on your future earnings over the long haul.

Then there are the actual costs of college, which seem to rise at dizzying rates year after year.

If you and your partner have polarized ideas around this topic, it’s going to be a difficult conversation. But it’s an important one to have. It’s better to find these answers out before you enter a new level of commitment with someone rather than after.

Do you have strong views on joint vs separate finances within a marriage?

A lot of people think that after you get married, you have one option: Merge 100% of your finances.

One-hundred percent joint finances after marriage does seem to be the cultural default, but there’s no rule saying you must comply with cultural tradition. You can also keep your finances completely separate, or do some mixture of both.

If you feel flexible on this matter, the answer to this question may not be important to you one way or the other. But if either you or your partner has an extremely strong point of view one way or another, it’s something to be aware of as you move forward in your relationship. It doesn’t have to be a deal-breaker by any means, but you do need to be prepared to work with it should you choose to move forward.

As we look at our future, how can we reach our financial goals together?

Things are probably getting really real if you’ve made it to this point. Congratulations!

In order for that to happen, though, you need to first plan together as a unit. Have those awkward conversations now so you can bask in the glee of building a life you love together for years to come. 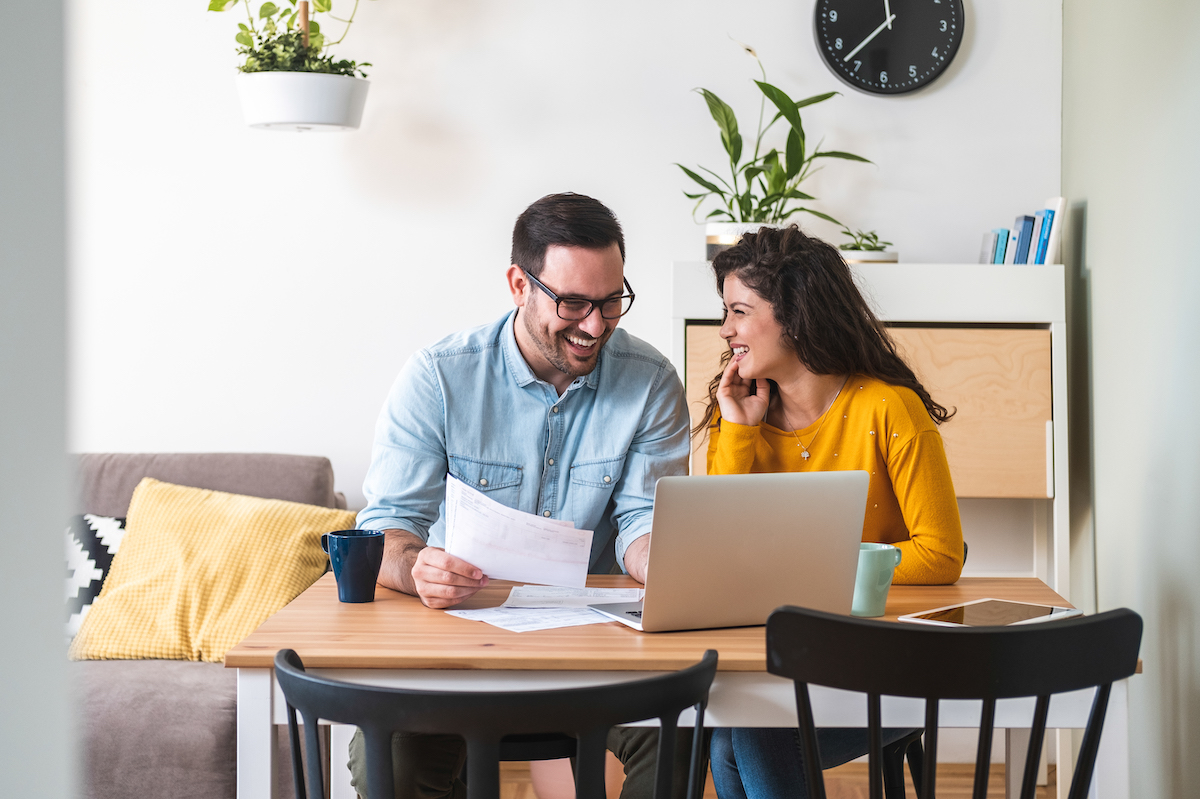 How to Manage Separate Finances in a Marriage

How to Share Google Sheets: Everything You Need to Know

Stay Informed About Data and Collaborator Updates to Your Tiller Sheet